The entropy byte-stream provided in the AlphaRNG output is based on electrical noise produced by two Zener diodes working in avalanche mode. The independent electrical noise created by each electrical circuit is amplified and sampled into independent raw byte-streams and have uniform distribution of the random values. The two resulting raw byte-streams are then combined and de-biased to produce the resulting entropy byte stream. The AlphaRNG software kit provides an API for retrieving data at each processing stage for the purpose of evaluation or, for example, when a different post-processing or conditioning algorithm is to be used.

AlphaRNG implements an API for establishing a secure connection with a computer over a USB interface. The secure connection is initiated on the computer by using the AlphaRNG software API (client). Once the client establishes a successful connection over the USB interface, the client creates a session request, encrypts it with the public RSA key, and sends it to the AlphaRNG (see Fig. 1). A session request consists of parameters such as symmetric cipher, randomly created cipher key, a new non reusable cipher IV, cipher AAD, MAC algorithm, randomly created MAC key, a new unique non-reusable request token, and a new generated MAC value of the plain request. The AlphaRNG receives the session request, decrypts it with its secret RSA key, generates its own MAC value of the plain request (using the MAC key provided in same request) and compares it with the MAC value provided in the requests. Upon successful validation of the session request, the AlphaRNG will store new session parameters and use those for the duration of the session. It then creates a response packet, encrypts it with the session cipher and key/IV/AAD provided and sends the response packet back to the client. A response packet consists of session cipher used, cipher tag, request token, MAC value of the plain response and RNG internal status code. The client receives the response, decrypts it with the session cipher using key/IV/AAD and cipher tag provided, generates its own MAC value of the plain response and matches it against the one provided, then it compares the provided token in the response with the one initially generated for the session request. Once the response is validated, the session is successfully established, and the client can securely communicate with AlphaRNG device over the USB interface. 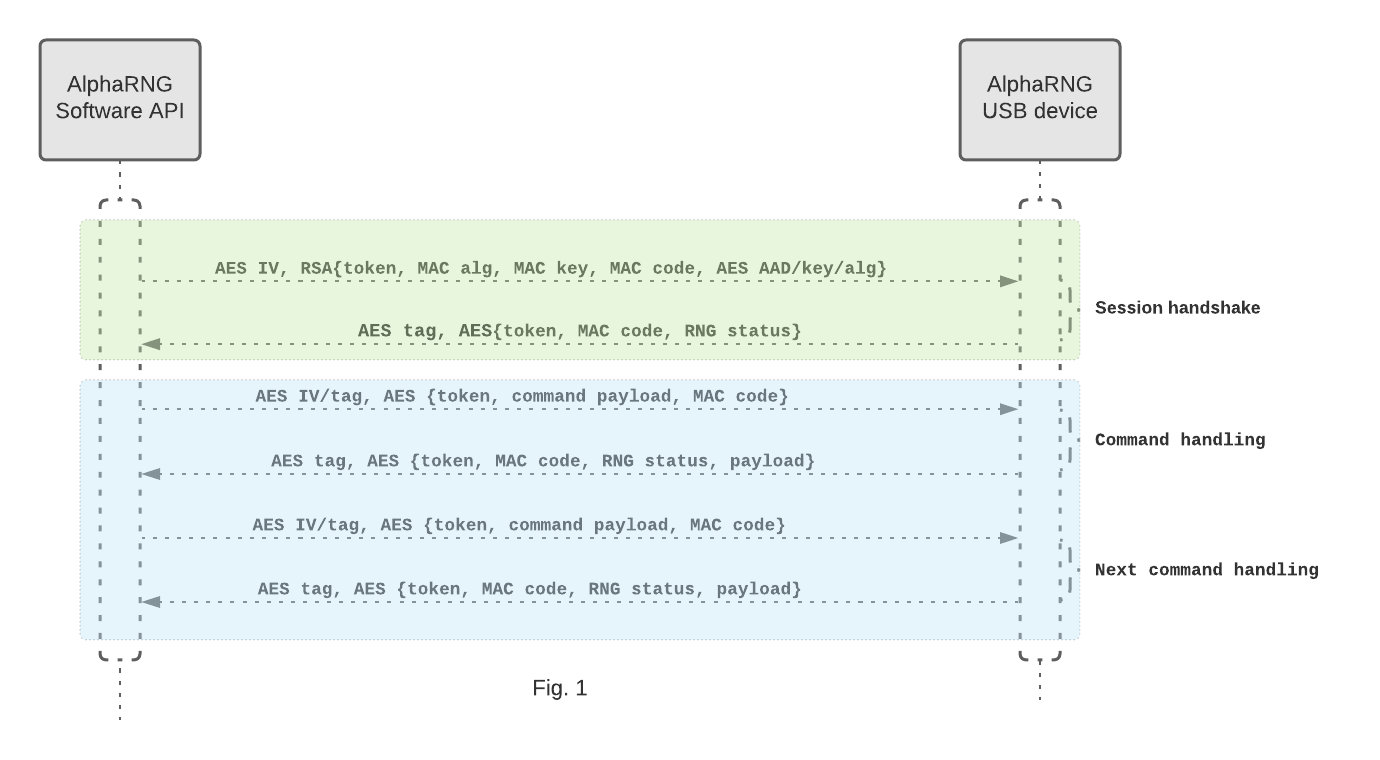 The AlphaRNG software kit comes with two hard-coded public keys: one RSA 2048 bit key and one RSA 1024-bit key. Those two keys are used for establishing secure connections with any AlphaRNG device. In addition, each AlphaRNG is shipped with a custom public RSA 2048-bit key that can be exclusively used with one such device.

All AlphaRNG devices are designed, assembled, programmed and tested in the United States. After each device is assembled, both random noise sources are individually inspected and verified. The device does not require any tune-up after it is assembled and the quality of the entropy produced remains constant.